Join the Kreher Preserve and Nature Center and staff from the Auburn Public Library on Friday, March 2nd at 3:30 pm to celebrate Read Across America.

Enjoy stories being read every 20 minutes at our tree house in the Nature Playground, by the campfire at amphitheater, the dock at the pond or at Reptile Rest.

Enjoy our Story Walk for younger readers and the whole family where a book unfolds page by page as you walk along the trail or bring a book to place in the Little Free Library or find a new favorite to take home with you.

Program will be held at the Kreher Preserve & Nature Center located at 2222 N. College Street near the AU Fisheries and Hwy 280. For more information, visitauburn.edu/preserve, email preserve@auburn.edu, or call 334-707-6512.

Approximately 80 different bird species can be found on the property throughout the year, including the belted kingfisher, Mississippi kite and indigo bunting. The preserve habitat hosts migratory birds in the spring such as warblers, vireos, tanagers and orioles. Fall and wintering birds such as nuthatches, kinglets and woodpeckers are frequently observed.

Visitors to the Kreher Preserve are also able to observe various species of raptors including hawks, owls and vultures. Nesting bald eagles are present on nearby properties and are frequently observed flying into and over the preserve.

“The Kreher Preserve and Nature Center is enjoyed by the university community as well as thousands of locals and visitors every year,” said Janaki Alavalapati, dean of the Auburn University School of Forestry and Wildlife Sciences. “We hope that by adding it to the Alabama Birding Trail even more families will be exposed to the opportunity to enjoy this unique discovery center with its miles of beautiful trails, natural habitats and educational programs.”

Preliminary findings from the U.S. Fish and Wildlife Service’s 2016 National Survey of Fishing, Hunting and Wildlife-Associated Recreation estimates that in 2016, more than 101 million Americans—nearly 40 percent of the U.S. population—participates in some form of fishing, hunting or other wildlife-associated recreation such as birdwatching or outdoor photography.

“The economic impact of outdoor and wildlife-related recreation is a boom for the U.S. economy representing nearly 1 percent of the gross domestic product,” said John Wild, president of the Auburn Opelika Tourism Bureau.

“With the addition of the Kreher Preserve and the Lee County Fishing Lake to the growing list of birding sites in Lee County, including the Wood Duck Preserve and Chewacla State Park, we anticipate the new designations will draw more people to the Auburn/Opelika area who will also visit our hotels, enjoy meals in restaurants and make retail purchases while they are here.”

The Alabama Birding Trails is a partnership of the Alabama Department of Conservation and Natural Resources, the University of Alabama Center for Economic Development and the Birmingham Audubon Society. It highlights many of the birds found in Alabama and encourages economic development through a tourism-based model.

More information about Alabama Birding Trails can be found online.

We are sad to announce that we will be postponing fire on the Plains due to the rainy forecast. We are planning to reschedule for later in the spring. So, check back for a reschedule date.

Join us at the Kreher Preserve and Nature Center on Saturday, February 10th from 10 am-1 pm for “Fire on the Plains!”. There is no charge for this interactive, all-ages, educational program that will explore how fire shapes the natural landscape of the forest. Auburn University School of Forestry and Wildlife Sciences Extension faculty, Fire Ecology Experts and the Alabama Forestry Commission will assist with prescribed fire demonstrations teaching how good fires can help prevent bad fires from occurring. Guests will be able to assist with the prescribed burns (weather permitting).

Fun and educational activities will also be available at our longleaf pine ecosystem including a longleaf game for the children. The Auburn Fire Department will be available to answer any questions you have about fire safety and to explore their truck and equipment. Smokey the Bear will teach us how to prevent wildfires and have a safe camp fire.

We are very excited to open up registration for our Summer Camp this year.  The camp’s theme will be ‘Unhuggables’ and will focus on those species that aren’t so cute and cuddly but have amazing and unique characteristics.  Campers will learn about and visit with lizards, snakes, frogs and turtles along with other ‘unhuggable’ species through nature crafts, games, activities, hikes, and more.  Camp lasts from 8:00am-12:00pm and includes a snack each day.  Registration is $110/student (KPNC Members) and available to children in grades 1st-7th (rising).  To register, go to ‘Purchase Tickets/Register’ on the KPNC Homepage.  For questions, email us at preserve@auburn.edu.

There is a cancellation fee of $25. After March 1 there will be no refund. 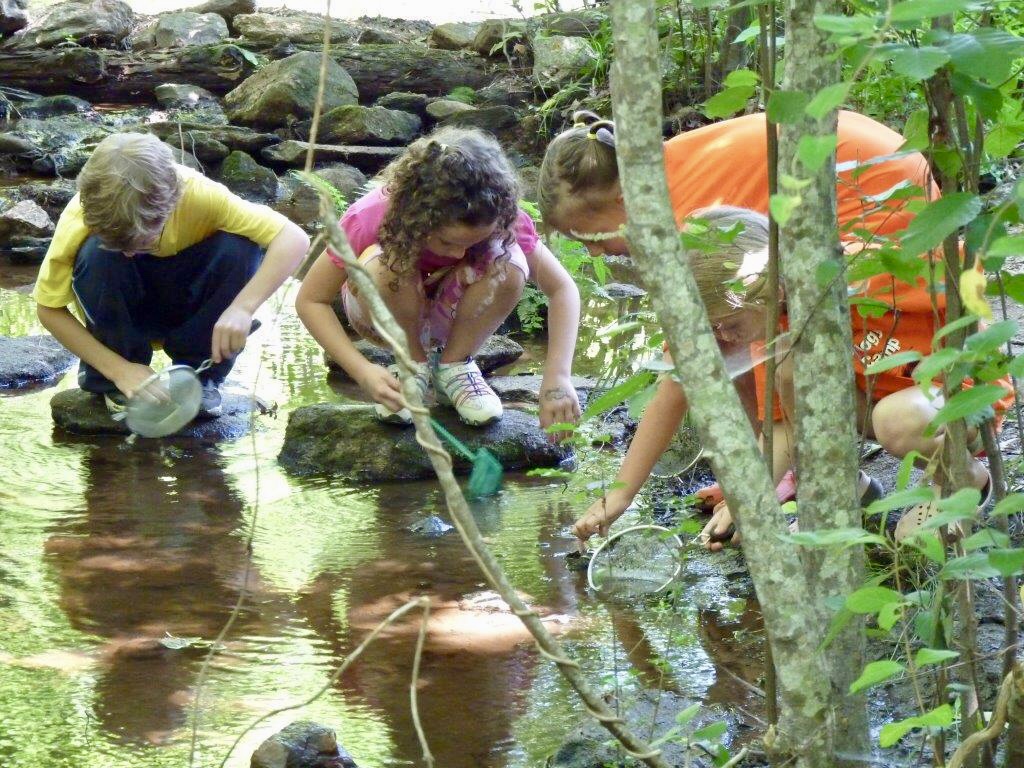 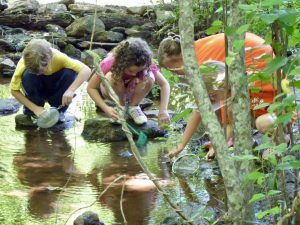 This environmental education program designed for home-schooling families offers a unique educational experience for students and their parents. Classes will meet the 1st Monday of each month from 10:00-11:30 a.m. Sessions are scheduled for Monday, March 5, April 2, and May 7.  Topics for spring include: Tree ID, Orienteering and Geocaching, and Pollinators. The sessions will consist of approximately a 45 minute lesson and a 45 minute hike. Family membership to the Kreher Preserve at Magnolia level ($35) or above is required for registration. If not a current member, please join or renew your membership at auburn.edu/preserve before completing your registration. Registration is open until March 1 and is $15 for first child, $27 for two children, $40 for three children and $50 for four children. Children 3 and under are free.

The Kreher Preserve and Nature Center is excited to once again offer Spring Break Camps for the children in our community. There will be two Spring Break camps this year, one will be held on March 12, 13, and 14th and the second on March 19,20, 21st. Both camps will be from 8:00am-3:00pm for 1st-6th graders with the theme being, Nature Getaway. Registration for these events begins on January 22nd. Check our interactive calendar for more details. 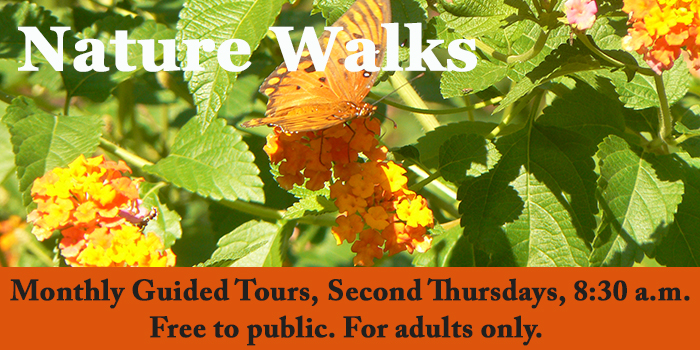 Take an interpretive tour through the Kreher Preserve & Nature Center with a trained naturalist.  Nature Walks offer excellent opportunities to socialize and learn, while enjoying fresh air and exercise in our beautiful outdoors. If you are new to the area or uneasy venturing out on your own, this is a great way to safely explore the outdoors while learning about the plants, wildlife, and ecology of our area. Guided Nature Walks feature a different topic each month chosen from a variety of seasonal themes. 2016 themes include:

January – Warm for the Winter: This month we will teach you how animals stay warm for the winter, what they eat, where they sleep as we hike out looking for birds and mammals who stayed for the winter.

February – Watersheds: This month we will learn all about state watersheds, river basins and our own Saugahatchee watershed!

March – Invasive Plant: We will investigate plants that have snuck into Alabama from other countries and why they are so detrimental to our ecosystems. We will enjoy a hike looking and pulling up any of these bad invasive plants and planting some good native plants!

April – Earth Day: Enjoy a walk on our wonderful earth learning all about the history of Earth Day and ways to take care of our favorite planet!

July – Butterflies: Learn all about beautiful butterflies. Walk to our butterfly garden to observe butterflies in all stages of life cycle.

August – Carnivorous Plants: Learn all about the fascinating world of bogs and the incredibly adaptive plants that live there!

September – Honey Bees: This month learn all about these fascinating insects and taste some local honey- from our own hives. We will learn all about pollination and the waggle dance while out on our hike to see our bees.

October – Fall Foliage: Come and learn all about seasonal changes and the signs of fall!

November – White-tailed deer: Hikers will investigate the wonderful world of the white-tail deer.

December – Great Backyard Bird Count: We will teach you the common winter birds found in our part of the state, ways to attract birds to your yard, and bird watching tips. Learn about the Great Backyard Bird Count and become a citizen scientist to help researchers gain a clearer picture of bird populations with the data you gather in a fun activity the whole family can enjoy.

Walks are offered the second Thursday of each month from 8:30 – 9:30 a.m. No pre-registration is required. Canceled in the event of rain. Hikes are free to the public. Donations are welcomed. All hikes are offered at the Kreher Preserve & Nature Center located at 2222 N. College Street, Auburn. The nature center is located 3 miles north of Toomer’s Corner. Traveling from the south, the KPNC entrance is on the right, just north of the AU Fisheries complex. 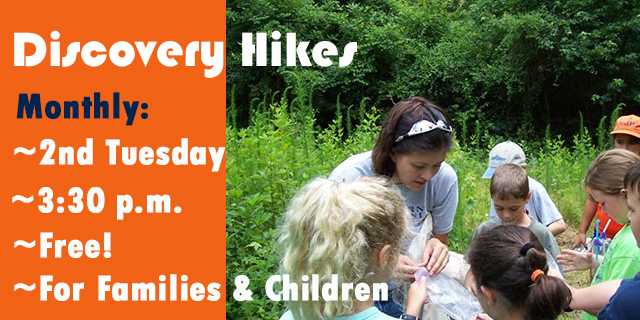 Explore the Kreher Preserve & Nature Center and learn something new each month about plants, wildlife and nature with a trained naturalist who will offer your family fun opportunities for hands-on learning, exploration, and exercise! Guided Discovery Hikes feature a different topic each month chosen from a variety of seasonal themes. 2016 nature themes include:

For families and other adults accompanying children. Walks are offered the second Thursday of each month from 8:30 – 9:30 a.m. No pre-registration is required. Canceled in the event of rain. Hikes are free to the public. Donations are welcomed. All hikes are offered at the Kreher Preserve & Nature Center located at 2222 N. College Street, Auburn. The nature center is located 3 miles north of Toomer’s Corner. Traveling from the south, the KPNC entrance is on the right, just north of the AU Fisheries complex.