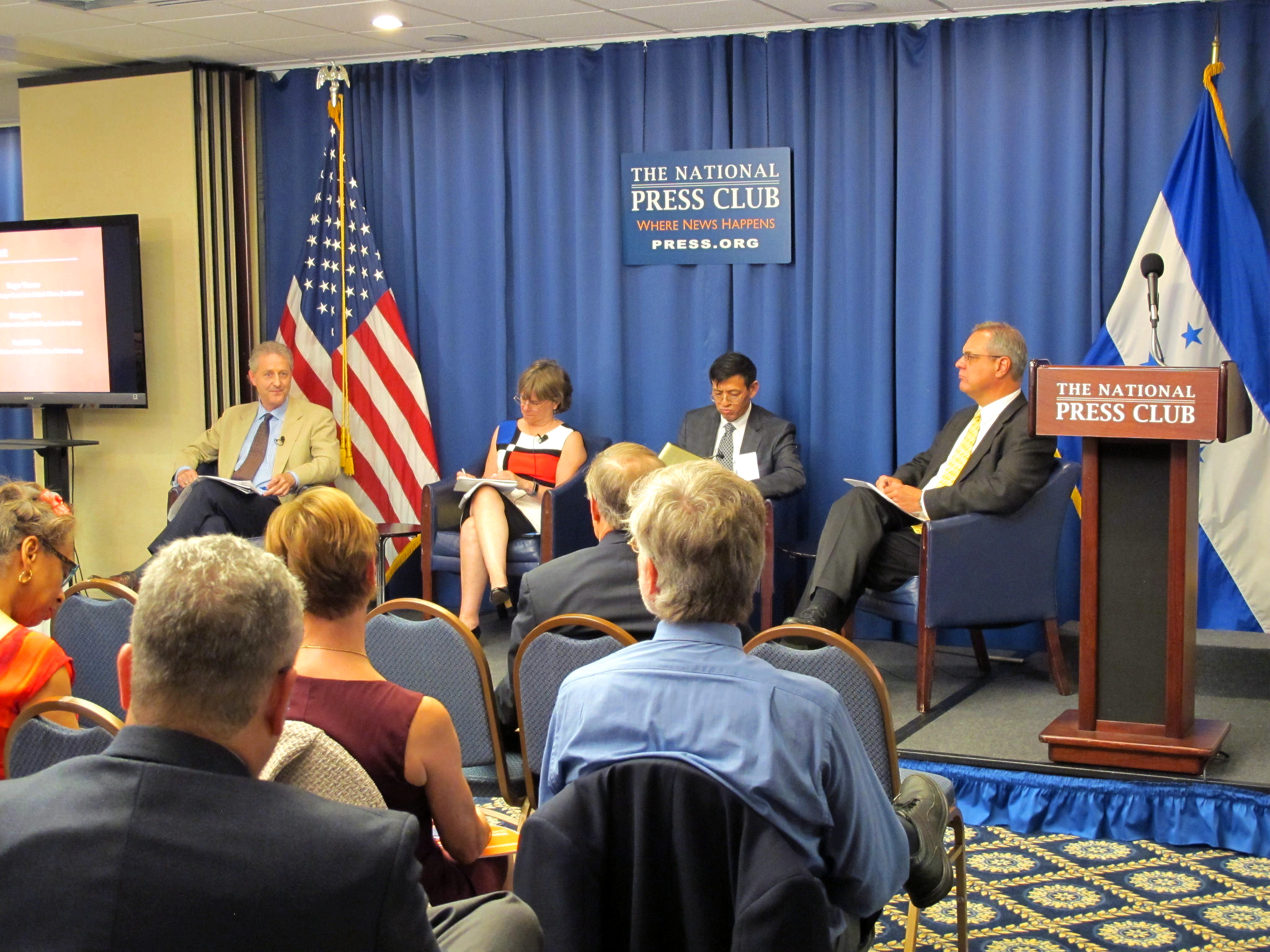 Inspired at an historic gathering of university presidents from around the world Honduran President Juan Orlando Hernandez said he planned to take the document that they had all signed, Presidents’ Commitment to Food and Nutrition Security, to Vice President Joe Biden, saying that this was an action plan that could help solve hunger.

Hernandez spoke on June 17 at the National Press Club gathering of Presidents United to Solve Hunger (PUSH), a movement that has grown in less than a year to nearly 80 universities from six continents.

“I would never forgive myself if I had taken office as president and let slip a number of opportunities such as the one PUSH is offering the world,” Hernandez said to a crowd of university and multi-sector leaders as he told them of his commitment to bring hope to the youth of his nation and prevent a repeat of the mass migration that rattled the United States just a year ago.

“That was not an immigration problem,” he added. “It was a problem of poverty, of hunger, of hopelessness. He then outlined his plan to invest in his country – especially in poor rural areas to not only revive agriculture with new knowledge and systems – most of which have been developed in universities, but also to put in place resiliency programs to protect the country from climate change risks.

Auburn University President Jay Gogue, who also serves on the PUSH Steering Committee, opened the meeting, saying, “PUSH is currently working on two fronts to develop a global view of university action on all campuses and also assess needs in developing countries.”

Bertini offered the most tweeted quote of the event that generated nearly 8 million impressions saying, “Hunger is deplorable but solvable.” She offered a six-point plan for the presidents who are poised to organize their campuses saying they needed to lead, choose their mission, organize by defining their area of focus, find allies – on and off campus, build a lasting program to ensure continuity and take advantage of all opportunities to advance the fight against hunger.

PUSH is an outgrowth initiative formed as a result of a meeting at Auburn University in 2014 as a way of getting university presidents worldwide to help universities provide leadership in solving hunger at home and abroad.

Hernandez, knowing he was talking to a group who most likely will never experience hunger, outlined the situation it has created in his native country, where more than 60 percent of the population lives in poverty. He reaffirmed the commitment of his administration to find solutions to hunger and poverty, as well as provide a new hope to the youth of his country who are migrating in the hundreds in search of a better life.

A self-described country boy, Hernandez said he considered hunger to be a solvable issue before he was introduced to Auburn University’s efforts at a Universities Fighting World Hunger summit in his native country in 2012. Even then, he knew it was an issue that this generation could solve. He said he believes partnering with PUSH and establishing a Hunger Solutions Institute for Latin America will be key to reaching these goals. Auburn University started its Hunger Solutions Institute in 2012 to leverage Auburn’s War on Hunger.

Auburn’s College of Human Sciences Dean June Henton listed a number of coming events for PUSH, including a summit Feb. 25-27, 2016 at the University of Missouri-Columbia. Additionally, she asked the presidents to contribute feedback on the first phase of an inventory and mapping initiative which will catalog activities in teaching, research, outreach and student engagement on each campus. This will result in an unprecedented database that will identify new areas of potential collaboration as well as provide each president, a unique view of all existing hunger-related activities.

© 2020 Presidents United to Solve Hunger. The views and opinions expressed on this page are those of the page developer and not necessarily those of Auburn University. Any comments on the contents of this page should be directed to its administrator.
P: 334-844-3219 • E: hsi@auburn.edu • A: 210 Spidle Hall Auburn, AL 36849-5601