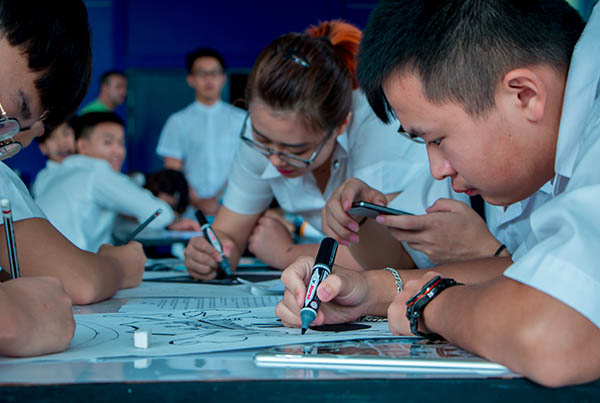 On January 15th and 16th,six Stenden University students organized a 2-day fundraiser and conference entitled “28 for Jungle Aid” as part of Universities Fighting World Hunger in Thailand. The event was initiated to raise money for Jungle Aid, an organization that helps people at the Thai-Burmese border with sustainable food, and support with education and medical supplies. While UFWH Conference Thailand, hosted by Stenden in June 2015, primarily aimed at raising awareness, 28 for Jungle Aid was the next step towards a hands-on approach to help eradicate world hunger with this global higher education movement.

The kick-off Fundraiser & Pub Quiz Party on Friday evening at CheckInn 99 included a pub quiz, live music, start of a 24-hour fasting by students, merchandise sale and a raffle with a total of 35 prizes that were sponsored by various local companies. With the great outcome and support by sponsors, students were able raise a total of roughly 40,000THB that night alone. Together with other collected donations, students achieved a total of 89,661THB,  or around 2,300 Euro.

To put this amount in perspective; one of the families that can potentially be supported via Jungle Aid has a household income of 5 to 6,000THB per month. With 100% of the raised money reaching the people supported by Jungle Aid, the funds raised by students will provide food, medical supplies, baby formula for infants, but also give high school support for a student who wants to pursue studying medicine and then help his people in the local villages. This allocation is very much in line with the focus on a sustainable support and the fight against malnutrition and undernourishement as less visible forms of hunger as defined by the World Food Programme.

The second day of the event then included guest lectures on waste management and malnutrition as well as workshops on poster design (to support Jungle Aid raise awareness) and intercultural exchange workshops as students from three universities and lot of nationalities were present. There was also an art exhibition & auction that was sponsored by students as well as a design competition that will most likely be continued in the classroom by one of the teachers from the Faculty of Art at Rangsit University. Eventually, the event was concluded with a closing party and dinner to ‘honor’ the students who have symbolically fasted for 24 hours and only drank juice that was sponsored by a local company.