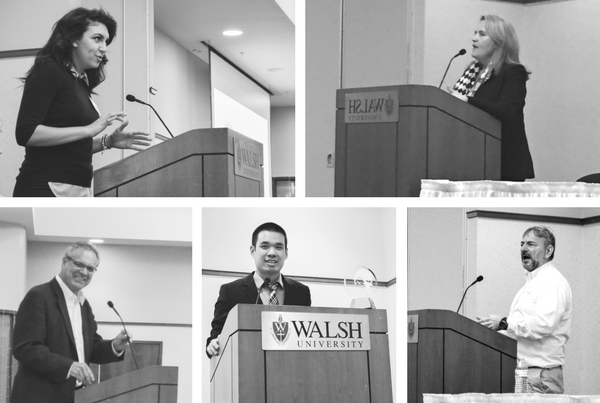 Without a doubt, Summit Squared was a success! On March 24-25, 2017 over 300 students and leaders came together at Walsh University in Canton, OH to discuss and learn about fighting hunger and reducing food waste. The event was a result of the hard work of Universities Fighting World Hunger (UFWH) and The Campus Kitchens Project (CKP). Both organizations empower students to combat hunger-related issues in their schools, communities, and even internationally by focusing on different aspects of the problem. Summit Squared brought together the efforts of both organizations to create a well-rounded depiction of the fight to end hunger.

During the Summit, students, faculty, and leaders from the public, private, and nonprofit sectors networked, collaborated, and shared their efforts to reduce food waste and hunger. One important aspect of the Summit was the release of Trash Hunger, Not Food: A Guide to End Campus Food Waste. This guide—a collaboration between UFWH and The Campus Kitchens Project, funded by The Rockefeller Foundation—aims to empower students and university employees to reduce the amount of food that their school wastes. The guide, which includes an online flipbook and printable version of the guide, sharable videos, and social media materials, can be found at campusfoodwaste.org.

Many keynote speakers and student leaders delivered inspiring messages and, as a result, Summit attendees walked away knowing that they can make a significant impact on the economy, society, and environment through increasing food security and reducing food waste. Additionally, Jon Chin, the Founder and CEO of Share Meals, was presented with the Clinton Hunger Leadership Award. To see recordings of the sessions, click here. The following are a few excerpts from the speakers:

Rachel Sumekh, Founder, Swipe Out Hunger
“Pair issues with your resources to be creative about the role you play in solving hunger.”

Roger Thurow, Senior Fellow, Chicago Council on Global Affairs
“There is no greater task than fighting hunger and malnutrition.”

Jon Chin, Founder and CEO, Share Meals
“Never stop. Don’t let the size of the problem scare you away!”