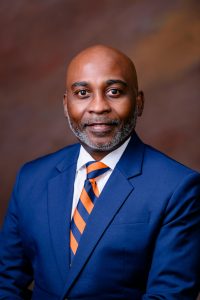 Metrick Houser is a native of Prattville, Alabama. He graduated from Auburn University with a degree in Chemical Engineering in 1993. He began his career with Union Camp which later merged with International Paper soon after graduation. In 2001, he received his MBA from Auburn University.   Since joining International Paper, he has held positions in Prattville, AL, Decatur, AL, and Murfreesboro, TN. Currently, he is the Director, Energy and Raw Materials. He is responsible for the procurement of both raw materials and energy for all International Paper facilities in North America and for strategy development globally.

Metrick has been active in many service areas through membership in Alpha Phi Alpha Fraternity Incorporated for the past 28 years, currently serving as the District of Tennessee Elections Chairman. He has also served on the Board of Directors for Rutherford County Chamber of Commerce and the Boys and Girls Club of Rutherford County. He currently serves on the Board of Visitors for the Honors College of Middle Tennessee State University as Chair-Elect. He also serves on the Auburn University Chemical Engineering Council. He is married to Jackie Houser with their three children Alex, Morgan, and Lindsey. In his spare time, he enjoys playing golf, hunting, and fishing.