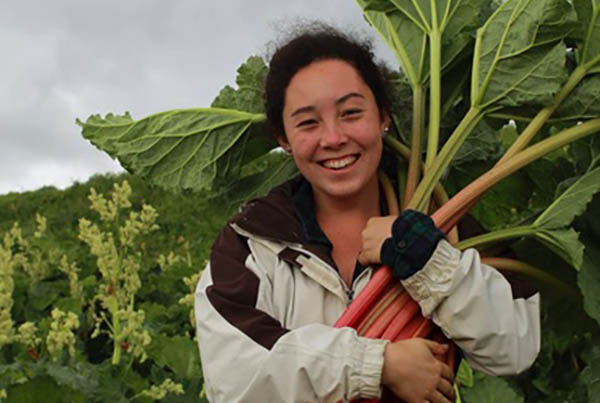 Iceland: A Summer of Sustainability

This summer, I spent three months interning at Sólheimar Ecovillage in Iceland. Located about 2 hours from Iceland’s capital Reykjavik, Sólheimar was made up of about 100 people. There were volunteers and interns from all over Europe and America, which created an amazingly diverse community. The Icelandic culture dominated the village, of course, but with so many unique people from foreign places, the village was a very open and accepting community. I found it interesting how so many people from various places and with curious pasts ended up in this isolated Icelandic village. I enjoyed hearing stories about each person’s winding path to this village this summer. The other interns had past jobs that ranged from Cruise Ship Singer to Professional Lumberjack to me, a college student from Alabama.

I had come to Sólheimar to learn about organic agriculture in the greenhouses, but I ended up learning so much about other cultures and other people’s outlooks on life. Many nights, we all sat in the living room of our house exchanging ideas and languages by the light of Iceland’s midnight sun. I made lifelong friends through this experience, and the people I met challenged and expanded my mental models.

Not only were my views about life challenged by the people I met, but also by the power of nature in Iceland. I have always been amazed by nature, but Iceland takes natural beauty to a new level. The mountains and fjords are ancient and magnificent. The enchanting landscape makes it easy to believe that trolls and elves are living in the moss covered lava fields. The land in Iceland is a living and powerful force that shapes Icelandic life everyday. They live in harmony with the environment instead of trying to tame the wild, as Americans are prone to do. Thirty minutes outside of Sólheimar, there is a volcano named Hekla, which is expected to erupt at any moment in the coming years. The Icelandic people casually joke about the disaster that would strike the village if the volcano were to erupt. Joking about a volcano eruption so close to my summer home was a strange concept to me. Icelanders live knowing that nature is always in control of their lives and choose to joke about it instead of fear it.

I experienced so many examples of nature’s mighty power while travelling around Iceland on the weekends. One amazing example of Iceland’s dynamic environment is the story behind a mountaintop along the south coast of the island. An Icelander explained to me that the mountaintop had broken apart from its base, slid across a glacier, and landed in the valley where it still sits today. Another weekend, I visited the site were the North American and Eurasian tectonic plates are slowly pulling apart miles beneath the land I stood on. Iceland’s geography is constantly changing because of volcanic eruptions, receding glaciers, and roaring rivers. I will never forget watching an iceberg break apart and float out to sea. After experiencing Iceland, my attitude towards the environment will never be the same.