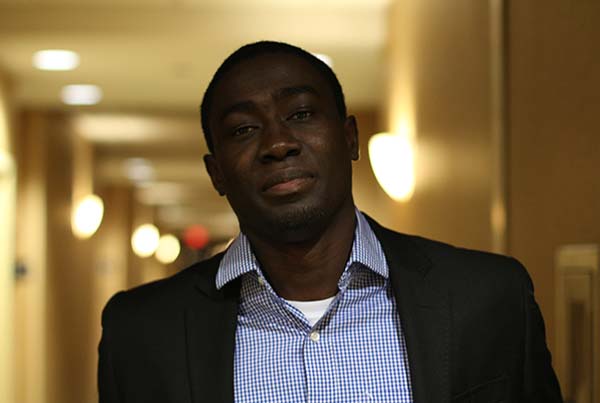 Balanding Manneh, a MasterCard Foundation Scholar at Arizona State University, has a vision for a hunger-free world, and he is working hard to make it happen. He grew up in a small village in The Gambia, where his father, a subsistence farmer, struggled to feed an extended family of fourteen.

Experiencing hunger first-hand as a child inspired him to found a nonprofit organization called Rural Impact. Since 2014, Rural Impact has helped farming communities throughout The Gambia by educating community leaders in sustainable agriculture practices; distributing seeds, fertilizer, and other important resources; and developing effective seed-storage. Balanding continues to serve as the President and CEO of his non-profit while he pursues a degree in Biological Sciences at ASU, but his hunger-fighting work doesn’t stop there.

During his first year of undergraduate studies, Balanding joined Living with Locusts, a dedicated team of students and faculty researching the relationship between livestock grazing, soil nitrogen dynamics, and locust outbreaks. He provides critical language skills for their fieldwork in Senegal, and oversees the greenhouse that provides grass for locusts used in lab-based experiments. He also volunteered with the “Diners We Care” project to help raise awareness among his fellow ASU students about dining hall waste

Through his ongoing work with Rural Impact, Living with Locusts, and spreading awareness on his university campus, it is clear that Balanding is an active, dedicated crusader in the fight against hunger. It is no surprise that Balanding was chosen as the 2016 President William Jefferson Clinton Global Hunger Leadership Award recipient. He received the award during the Clinton Awards Banquet, which concluded the 11th Annual Universities Fighting World Hunger Annual Summit, hosted by the UFWH, the University of Missouri and the Deaton Institute of International Leadership in Development at the University of Missouri February 26-27th. In the fashion of a true activist, he dedicated the award “to those fighting to feed their families.” Below, Balanding answers a few questions about receiving the Clinton Award, managing his many activities, what’s next for him, and his experience at the UFWH Annual Summit: 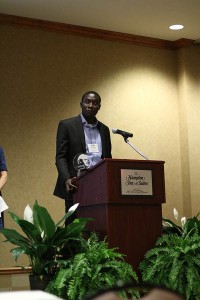 What was your initial reaction when you found out you won the Clinton Global Hunger Leadership Award?

“I was very excited when I received a call informing me that I have been selected for the award because I honestly wasn’t expecting to receive it. I felt really honored that my work is recognized in such a grand way.”

How do you juggle being the CEO of a non-profit, studying full-time, and doing research?

“For me it’s all about time management and motivation. I am on a scholarship and that comes with its responsibilities, you know, maintaining a certain GPA and so on. I try as much as possible to make the most of the available time I have to get things done and stay ahead, especially with classes. Sometimes it’s tough; there is always a lot to do; classes, assignments, research and the non-profit. But with the non-profit, I have a fantastic team of people and we all work together to keep things running smoothly. “

What is next for your work with Rural Impact and Living with Locusts?

“I will be traveling to Gambia (my home country) and Senegal for 3 months this summer. While in Gambia I will work with about 150 women in a rural community on a community vegetable garden project which is aimed at increasing their income levels and increasing food availability, and in Senegal I will be doing research on locusts and their impact on food security and livelihoods of smallholder farmers. I have big plans for Rural Impact. It is currently a national organization but I want to see it become an international non-profit that will transform the lives of many more people. There are lots of people out there that desperately need one form of support or the other especially in developing countries like mine. In a country like mine where over 85% of the population are smallholder farmers, pests such as locusts and grasshoppers are always a threat to food security and I can see myself working with them for sometime to come.”

What experience or insights did you gain from attending the Universities Fighting World Hunger Annual Summit?

“It was a terrific experience for me. I had the opportunity to meet great people, people that are committed to ending hunger in a way that I have never seen before. I really felt a sense of connection to everyone. Meeting all these people demonstrates the fact that anyone can get involved and contribute in the fight against hunger. They don’t have to be in a specific discipline or pursuing a certain career. The more hands we have on deck, the faster we will get to the end of hunger.”

It was so encouraging to hear from Balanding at the summit, and to know that his hard work is making a direct impact on hunger. Congratulations to Balanding, and to the many other impressive applicants for this year’s Clinton Award. Your efforts are an inspiration to us all.