The GODAN Summit was a great success. On September 15-16, 2016, nearly 800 world leaders, researchers, farmers, students, and others came together at the Midtown Hilton in New York City. This historic event was organized by Global Open Data for Agriculture and Nutrition, Presidents United to Solve Hunger, the ONE Campaign, and the governments of the United States, United Kingdom, and Kenya. The purpose of this historic event was to highlight the importance of open data as means to improve sustainable agriculture and nutrition on a global scale. Attendees met to discuss, brainstorm, and share their knowledge of open data with the hope of educating and collaborating with others who share these priorities.

There were several unique aspects of the GODAN Summit: First, the GODAN Challenge encouraged students and young professionals to create ways in which open data can be used to improve agriculture and nutrition – either through government policy or technology development. Additionally, GODAN and its partners promoted the Global Citizen petition that urges world leaders to recognize importance of open data. For the Summit itself, each of the Summit visionaries organized various sessions of highly qualified individuals to speak about certain aspects of open data development and use. During these two days of sessions, networking, and learning, the GODAN Hackathon competition occurred. The hackathon challenged 80+ contestants to team together and develop technology that will ultimately change the way that data collection and distribution is approached. The Summit came to a close with a final event: a high-level forum at the United Nations Headquarters. The forum involved government officials and other important figures in food security and included a call to action for open data development.

Below are short summaries from a several of the sessions. The plenary sessions were recorded can be found here.

On September 15, 2016, Amir Dossal, the GODAN Summit Master of Ceremonies and CEO of Global Partnerships Forum kicked off the event with a warm welcome to all attendees and an introduction of twelve prestigious speakers. Nancy Stetson from, the US Department of State, insisted, “We do not have an excuse anymore to use outdated and incomplete information.” Kate Van Waes, the ONE Campaign Policy Director outlined 4 ways to make change happen: Policy, Politics, Public Pressure, and Pop culture. “Revealing the data is not enough. We have to build a universe around the data,” she explained. We must connect people, connect data, and connect the data to the people. One approach put forth was to create a professional social network built around data. Kerry Kennedy, president of the Robert F. Kennedy Human Rights, had concrete actions lined up as well. She proposed governments come together and pass freedom of information acts for all the lives that are at stake. Willy Bett, the Kenya Cabinet Secretary of the Ministry of Agriculture, pointed out that open data helps obtain investors. Open data helps investors make decisions about risks and benefits of investing and allows them to not plunge in blind. 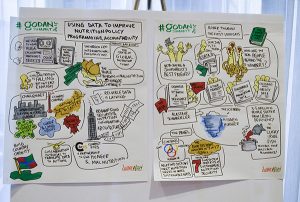 PUSH organized an interdisciplinary panel of experts in policy, data collection, data interpretation, and data sharing to discuss the use of data to improve nutrition policy, programming, and accountability. Catherine Woteki, Chief Scientist of the USDA opened the panel by recognizing how GODAN is an outstanding example of different groups joining forces to support a big idea. She was followed by several panel members who described their efforts to collect and apply the findings of nutrition data. Samuel Myers of the Planetary Health Alliance described how open data can help us to recognize connections between different factors of global health, such as the effects of rising CO2 levels on crops and changes in populations at risk for zinc deficiency. In addition, Anna Herforth, a researcher for Indicators of Affordability of Nutritious Diets in Africa (IANDA), described some of her work to develop valid, useful metrics on the affordability of nutritious diets around the world. Roger Thurow, one of the final speakers and author of The First 1,000 Days, stressed the tremendous human impact that open data can have. In a powerful reminder to all attendees, Mr. Thurow recognized that data and statistics represent individual people, each of whom have a story to tell. Finally, Alastair Summerlee, President Emeritus of the University of Guelph, and Rachel Lambert, Interim Deputy Chief Scientific Adviser for International Development at DFID helped to tie together the many points that had been made during the panel. They emphasized the need for better, high quality data and recognition of the drivers behind food choices and policy options.

This session, led by Jeanne Holm, focused on how Africa can benefit from open data. She explained that most of African farmers are not formally educated, but can still benefit heavily from open data. The farmers need data even though they are not data scientists. Having data that is shareable between countries would make data more accessible and would put farmers in better control of their resources. Cheryl Christensen explained that open data would ease the fight for food security. Besides new data, analytical models based on new and old data will allow for future projections, not just for a specific country, but an entire continent. Factors like price fluctuations, crop seasonality, and market value can be used to project food security. Presently, the world is familiar with journalism, but not data journalism. Many stories are published in different languages from different countries. These stories will not be useful unless the reader is familiar with multiple languages. If journalists are familiar with data, information can be transformed into simple, meaningful data that can be interpreted by the majority of the world.

The Soap Box session was a chance to allow any organization to come and promote their work for 2 minutes. At the end of each talk was a potential action was given to the audience. The goal was to allow organizations to network and benefit from one another. There were three categories that organizations signed up to discuss: ways to improve government policies, empowering individuals, and driving innovation. Many phenomenal ideas and projects were share. Be sure to check out the full session on GODAN’s YouTube channel.

Agriculture as a Public Good for Africa’s Prosperity

Willy Bett, the Kenyan Cabinet Secretary for the Ministry of Agriculture, Livestock and Fisheries, identified the current factors that drive food security in Africa: access to inputs, affordable credit, insurance, irrigation capacity, mechanization, soil fertility, market access, and commodity stability. He stressed that sufficient, reliable, and timely agricultural data is required among policy makers and in the commodity value chain. His focus is to prioritize and improve management of agriculture systems. Sierra Leon’s Minister for Information and Communication concluded by saying, “It’s unfortunate that countries spend billions on drones and ammunition but not on data that will most likely improve standards of living.” 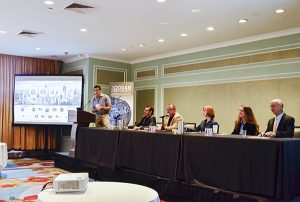 PUSH and CGIAR teamed up to begin a discussion on whether or not the Open Data Revolution is a plausible goal. Mark Keenum, President of Mississippi State University, lead panels that represented every sector: academia, government work, and financial institutions. Innovators like Matthew McNaughton, founder of SlashRoots, academia leaders, Glenda Humiston and Brady Deaton, and representatives from CIAT brought their knowledge and experience to the discussion. The audience was not left out of the dialogue as they were encouraged to participate through polls, ask questions, and contribute solutions to problems. The session addressed obstacles for open data and key sectors that need to be utilized for open data to be a success. Participants and panelists alike left with a sense hope that open data can be utilized to further the fight against hunger.

Open Data: from Release to Impact

This session discussed the intermediate processes that must happen between when sectors release data farmers will receive it.  Ian Boyd, chief scientific advisor of the United Kingdom’s Department for Environment, Food and Rural Affairs, claimed that people define open data in different ways. We need to come together and define clearly what we are discussing. There must be a purpose for open data; simply publishing it publically is not enough. Dean Allemand, with the Bobbin and Syngenta projects, discussed identifying our world’s surpluses and distributing them to our global shortages. He went into detail about the importance of a “data ecosystem” – meaning sustainable long-term research and sharing that is interconnected. The obstacles of open data that need to be targeted are openness and acceptance of new policy, open environment for private sector, connecting data sets, standard transparent protocols, widespread education on open data to achieve collaboration, filling gaps of data, and creating business models to benefit farmers, not businesses.

High-Level Forum at the ECOSOC Chamber at UN Headquarters:

All of the events of the GODAN Summit built up to this historic meeting of government officials and powerful organization leaders. Amir Dossal lead the discussion as various speakers described the efforts and goals of their organizations and governments to promote open data development. Mark Keenum, the President of Mississippi State University stated “PUSH is honored to be a part of GODAN Summit 2016… [its] universities work collaboratively and cooperatively to increase food security.” Judith Rowland, of Global Citizen, spoke about the success of the open data petition that had been collecting signatures for months leading up to the Summit. During the open intervention portion of the forum, representatives from Columbia, Canada, the Netherlands, Argentina, Kosovo, Brazil, Ghana, and France voiced their countries’ commitments to using open data to make agriculture more sustainable.